In recent days I have been testing how modifying the default CPU and GPU frequencies on the rpi4 increases the performance of our reference Vulkan applications. By default Raspbian uses 1500MHz and 500MHz respectively. But with a good heat dissipation (a good fan, rpi400 heat spreader, etc) you can play a little with those values.

One of the tools we usually use to check performance changes are gfxreconstruct. This tools allows you to record all the Vulkan calls during a execution of an aplication, and then you can replay the captured file. So we have traces of several applications, and we use them to test any hypothetical performance improvement, or to verify that some change doesn’t cause a performance drop.

So, let’s see what we got if we increase the CPU/GPU frequency, focused on the Unreal Engine 4 demos, that are the more shader intensive: 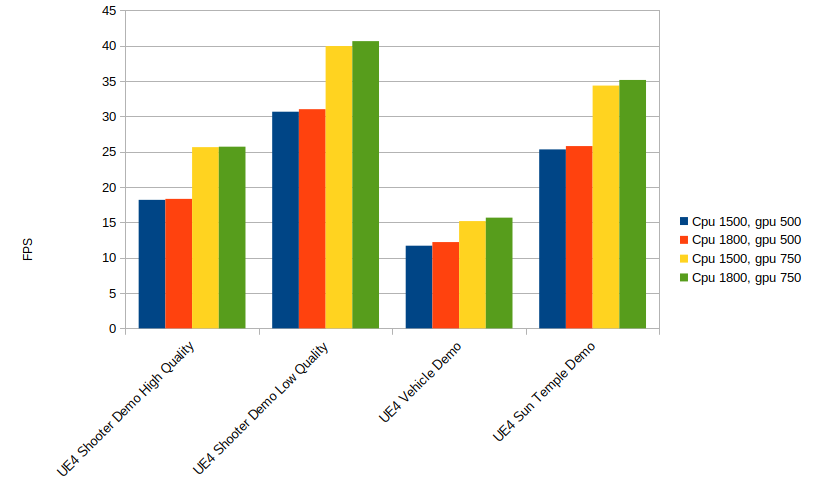 So as expected, with higher clock speed we see a good boost in performance of ~10FPS for several of these demos.

Some could wonder why the increase on the CPU frequency got so little impact. As I mentioned, we didn’t get those values from the real application, but from gfxreconstruct traces. Those are only capturing the Vulkan calls. So on those replays there are not tasks like collision detection, user input, etc that are usually handled on the CPU. Also as mentioned, all the Unreal Engine 4 demos uses really complex shaders, so the “bottleneck” there is the GPU.

Even if it runs fairly smooth most of the time at ~24 FPS, there are some places where it dips below 18 FPS. Let’s see now increasing the CPU/GPU frequencies to 1800/750:

Here is another example with the Unreal Engine 4 Shooter demo, already increasing the CPU/GPU frequencies:

Here the FPS never dips below 34FPS, staying at ~40FPS most of time.

It has been around 1 year and a half since we announced a Vulkan 1.0 driver for Raspberry Pi 4, and since then we have made significant performance improvements, mostly around our compiler stack, that have notably improved some of these demos. In some cases (like the Unreal Engine 4 Shooter demo) we got a 50%-60% improvement (if you want more details about the compiler work, you can read the details here).

In this post we can see how after this and taking advantage of increasing the CPU and GPU frequencies, we can really start to get reasonable framerates in more demanding demos. Even if this is still at low resolutions (for this post all the demos were running at 640×480), it is still great to see this on a Raspberry Pi.