Join us at LinuxCon + ContainerCon Japan! LinuxCon Japan is the premier Linux conference in Asia that brings together a unique blend of core developers, administrators, users, community managers and industry experts. It is designed not only to encourage collaboration but to support future interaction between Japan and other Asia Pacific countries and the rest of the global Linux community.

ContainerCon also comes to Japan for the first time this year, after a successful launch in North America in 2015. New developments in Linux containers are driving the adoption of cloud and virtualization technologies in many industries and ContainerCon Japan will provide a platform for exhibiting the best work.

My colleague Mi Sun Silvia Cho will be talking about WebKit For Wayland and we will show some nice demos about our Browsers, Graphics and Compilers experience in our booth in Tokyo next month.

It might be that the heading is a bit pretentious, but I am quite sure that this year 2012 will be known in Galicia as The Free Software Year, when we have held Guadec and Libre Software World Conference 2012. And I am really happy that we have been able to achieve such an important milestone.

For people that do not know a lot about our small region, I would like to say that Galicia has ~2.79M inhabitants (and more than other 300k more spread around the globe), 29594 km2 of land, 1500 km of coast, warm weather (less sunny than the South of Spain but with beaches that could be part of the Caribbean Sea), good wines and varied diet with seafood, fish and meat, as part of our specialties and three smalls airports (we could talk about this for hours :P). Being a quiet region where to live in a safe place, we are not so known but I am sure that almost everybody has been warm welcomed.

Both conferences have been a success in terms of attendance, organization and contents, bringing to Galicia some of the most important people around Free Software and GNOME communities, with very special keynotes and interesting debates about the future of GNOME.

Suppose you will realize reading my previous paragraphs that I am very proud of Galicia holding GUADEC and LSWC 2012 and that Igalia have participated organizing, sponsoring and supporting both conferences. Not to forget that we are also preparing the next Webkit hackfest in December at Igalia’s premises in A Coruña, which will round off 2012.

Some years will pass before having all them again in Galicia together. However, everybody is welcome to pay us a visit :), give us a call and enjoy with us our amazing landscape, having dinner in a relaxed environment.

For the record some photos about Galicia and the conferences: One week to Libre Software World Conference 2012 or LSWC’12 and there are almost 400 people enrolled to the event. Next Friday, the 12th the enrollment period will close and there will be no more time to sign up for the conference. Hence, hurry up if you don’t want to want to be left out of the enrollment.

Agenda is almost closed and it is publicly available in our website.

I would also like to say that Master On Free Software organized by Igalia and URJC in Galicia is sponsoring this event and it will keep the enrollment period until the conference is over. If you would like to listen about it we will be talking on Friday, the 19th at 10:30 as part of LSWC’12. Do no hesitate to get in touch with us to learn what this master can do for you. High percentage of ex-students are very happy with having studied our master thanks to our practical approach to all the subjects.

Last week I attended Open Source World Conference 2012 in Granada. I participated in a presentation about products and solutions from several companies. In my case, I was there to talk about LibrePlan and to moderate another round table of presentations.

I met some old friends there and new other ones 🙂 and I hope this kind of events are kept in order to share our experiences around Free Software.

Here you can see some photos of my round table that was held on Friday: 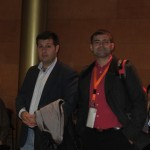 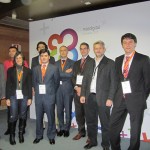 First of all, thanks to NovaCaixaGalicia because they offered us a meeting room to hold this session.

More than 20 people attended the session and 5 people from “Master network” put forward their experiences around free software. Some interesting topics:

Thanks to lecturers and attendants. This open session wouldn’t happen without your help :).

I would like to remind that you can already enroll yourself in any of the modules (desktop/mobile and web development). We have just updated the program for the module.

A photo of the first lecture: Master on Free Software organizes an open session in March, the 18th. People from the master network will talk about their experiences around free software explaining different projects and activities they are taking part.

Jesús María Barahona, teacher and researcher at Systems and Communications group (LibreSoft) and contributor to different books and articles about Free Software, is going to participate in this session. Moreover, some ex-students will talk about their experiences and activities. More information about this event in this page.

The event is free and open but registration is necessary in order to control capacity.

I, as part of NavalPlan team, am going to FOSDEM this weekend. I’ll be there to learn from other people but I’ll also be available to explain NavalPlan to these people interested in knowing more about the project.

I’ll be wearing this t-shirt: So, if you are interested in NavalPlan don’t hesitate to ask me about it.

NavalPlan is a free software web project planning tool developed and Igalia is one of the main contributors. Main features are:

Master on Free Software Projects Development and Management offers a set of specialization courses inside the master. First module is “Systems administration” and it is taught between December and February. These courses are very useful for people interesting on free software administration and development. Enrolment period is open until December, the 10th for systems module.

This is the last week for enrolment in Master on Free Software (Vigo edition). If you have doubts about the master ;), please contact with us and we will answer all of them…

On the other hand, if the master is interesting for you but you prefer specific courses, we will offer some modules during next year:

These modules will be announced and new enrolment period will be open for them. Stay tuned!

Master on Free Software open sessions were closed during last weekend with a round table and a seminar.

First of all, thanks to speakers and attendants for coming. We talked during three hours about different topics: It was a very interesting debate and I would like to stress some interesting conclusions: