A few weeks ago the W3C arranged a new edition of TPAC, this time it was an hybrid event. I had the chance to attend onsite in Vancouver (Canada).

This is the second conference for me this year after the Web Engines Hackfest, and the first one travelling away. It was awesome to meet so many people in real life again, some of them for the first time face to face. Also it was great spending some days with the other igalians attending (Andreu Botella, Brian Kardell and Valerie Young).

This is my third TPAC and I’ve experienced an evolution since my first one back in 2016 in Lisbon. At that time Igalia started to be known in some specific groups, mostly ARIA and CSS Working Groups, but many people didn’t know us at all. However nowadays lots of people know us, Igalia is mentioned every now and then in conversations, in presentations, etc. When someone asks where you work and you reply Igalia, they only have good words about the work we do. “You should hire Igalia to implement that” is a sentence that we heard several times during the whole week. It’s clear how we’ve grown into the ecosystem and how we can have an important impact on the web platform evolution. These days many companies understand the benefits of contributing to the web platform bringing new priorities to the table. And Igalia is ready to help pushing some features forward on the different standard bodies and browser engines.

The rest of this blog post is about some brief highlights related to my participation on the event.

On Tuesday evening there was the developer meetup with 4 talks and some demos. The talks were very nice, recordings will be published soon but meanwhile you can check slides at the meetup website. It’s worth to highlight that Igalia is somehow involved in topics related to the four presentations, some of them are probably better known than others. But some examples so you can connect the dots:

On top of the talks, Igalia was showing a demo of Wolvic, the open source browser for WebXR devices. A bunch of people asked questions and got interested on it, and everyone liked the stickers with the Wolvic logo.

Lots of amazing things have been happening to CSS recently like :has() and Container Queries. But these folks are always thinking in the next steps and during the CSSWG meeting there were discussions about some new proposals: 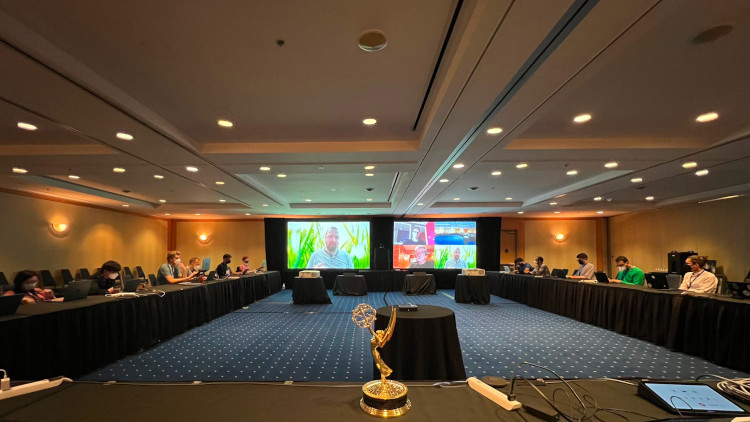 Picture of the CSSWG meeting by Rossen Atanassov

On the breaks there were lots of informal discussions about the line-clamp property and how to unprefix it. There different proposals about how to address this issue, let’s hope there’s some sort of agreement and this can be implemented soon.

Shadow DOM is cool but also quite complex, and right now the accessibility story with Shadow DOM is mostly broken. The Accessibility Object Model (AOM) proposals aim to solve some of these issues.

At TPAC a bunch of folks interested on AOM arranged an informal meeting followed by a number of conversations around some of these topics. On one side, there’s the ARIA reflection proposal that is being worked on in different browsers, which will allow setting ARIA attributes via JavaScript. In addition, there were lots of discussions around Cross-root ARIA Delegation proposal, and its counterpart Cross-root ARIA Reflection, thinking about the best way to solve these kind of issues. We now have some kind of agreement on an initial proposal design that would need to be discussed with the different groups involved. Let’s hope we’re on the right path to find a proper solution to help making Shadow DOM more accessible.

Maps on the Web

This is one of those problems that don’t have a proper solution on the web platform. Igalia has been in conversations around this for a while, for example you can check this talk by Brian Kardell at a W3C workshop. This year Bocoup together with the Natural Resources Canada did a research on the topic, defining a long term roadmap to add support for maps on the Web.

There were a few sessions at TPAC about maps where Igalia participated. Things are still in a kind of early stage, but some of the features described on the roadmap are very interesting and have a broader scope than only maps (for example pan and zoom would be very useful for other more generic use cases too). Let’s see how all this evolves in the future.

And that’s all from my side after a really great week in the nice city of Vancouver. As usual in this kind of event, the most valuable part was meeting people and having lots of informal conversations all over the place. The hybrid setup was really nice, but still those face-to-face conversations are something different to what you can do attending remotely.

See you all in the next editions!