Let’s do a small introduction as this is a kind of special post.

As you might already know, last summer Igalia launched the Open Prioritization experiment, and :focus-visible in WebKit was the winner according to the pledges that the different projects got. Now it has moved into collecting funds stage, so far we’ve reached 80% of the goal and Igalia has already started to work on this. If you are interested and want to help sponsoring this work, please visit the project page at Open Collective.

In our regular client projects in Igalia, we provide periodic progress reports about the status of tasks and next plans. This blog post is a kind of monthly report, but this time the project has many customers, so it looks like this is a better format to share information about the status of things. Thank you all for supporting us in this development! 🙏

Disclaimer: This is not a blog post explaining how :focus-visible works or the implications it has, you can read other articles if you’re looking for that.

First things first, my initial thoughts were that :focus-visible was a pseduo-class which would match an element when the browser natively shows a focus indicator (focus ring, outline) when an element of a page is focused. And that’s more or less what the spec says on the first sentence:

The :focus-visible pseudo-class applies while an element matches the :focus pseudo-class and the user agent determines via heuristics that the focus should be made evident on the element.

They key part here is that native behavior doesn’t show the focus indicator on purpose in some situations when the :focus pseudo-class matches, mainly because usability studies indicate that showing it in all the cases is not what the user expects and wants. Before having :focus-visible the web authors have not way to access the same criteria to style the focus indicator only when it’s going to be shown natively, and still keep the website being accessible.

Apart from that the spec has a set of heuristics that despite being non-normative, it looks like all implementations are following them. Summarizing them briefly they’d be something like:

This is just a quick & dirty summary, please read the spec for all the details. There have been years of research around these topics (how focus should work or not on the different use cases, what are the users and accessibility needs, how websites are managing focus, etc.) and these heuristics are somehow the result of all that work.

At this point it looks like we can more or less understand what :focus-visible is about. So let’s start playing with it. The definition seems very clear, but testing things in the current implementations (Chromium and Firefox) you might find some unexpected situations.

Let’s use a very basic example:

WARNING: :focus-visible is not supported on your browser.
Focus me.

If you focus the <div> with a mouse click, :focus-visible doesn’t match per spec, so in this case the background doesn’t become green (if you use the keyboard to focus it will match :focus-visible and the background would be green). This works the same in Chromium and Firefox, but Chromium (despite the element doesn’t match :focus-visible) shows a focus indicator. Somehow the first spec definition is already not working as expected on Chromium… The issue here is that Chromium still uses :focus { outline: auto; } in the default UA style sheet, and the element matches :focus after the mouse click, that’s why it’s showing a focus indicator while not matching :focus-visible.

Actually this was already on the spec, but Chromium is not following that yet:

There was already a related CSSWG issue on the topic, as the spec currently suggests the following code:

This works as a kind of workaround for this issue, but if the default UA style sheet uses :focus-visible that won’t be needed.

Anyway, I’ve reported the Chromium bug and created WPT tests, during the tests review Emilio Cobos realized that this needed a change on the HTML spec and he wrote a PR to update it. After some discussion with Alice Boxhall the HTML change and the tests were approved and merged. I even was brave enough to write a patch to change this in Chromium which is still under review and needs some extra work.

WebKit is the third browser engine adding support for :focus-visible so the first natural step was to import the WPT tests related to the feature. This looked like something simple but it ended up needing some work to improve the tests.

There was a bunch of :focus-visible tests already in the WPT suite, but they need some love:

Then I imported the tests in WebKit and I discovered a bug related to focus event and :focus pseudo-class. :focus pseudo-class was not matching inside the focus event handler. This is probably not important for web authors, but :focus-visbile tests were relying on that. Actually this had been fixed in Chromium more than 5 years ago, so first I moved to WPT the Chromium internal test and used it to fix the problem in WebKit.

Once the tests were imported in WebKit, the problem was that a bunch of them were timing out in Mac platforms. After investigating the issue I realized that it’s because focus event is not dispatched when you click on a button in Mac. Digging deeper I found this old bug with lots of discussions on the topic, it looks like this is done to keep alignment with the native platform behavior, and also in order to avoid showing a focus indicator. Even Firefox has the same behavior on Mac. However, Chromium always dispatch the event independently of the platform. This makes that some of the tests don’t work automatically on Mac, as they wait for a focus event that is never dispatched. Anyway maybe once :focus-visible is implemented, it could be rediscussed the possibility of modifying this behavior, thought it might be not possible anyway. In any case, WebKitGTK port, the one I’m using for the development, does trigger the focus event in this case; and I’ve also changed WPE port to do the same (maybe Windows port will follow too).

One more thing about the tests, lots of these :focus-visible tests use testdriver.js to simulate user actions. For example for clicking an element they use test_driver.click(element), however that simple instruction is causing some kind of memory leak on Chromium when running the tests. The actual Chromium bug hasn’t been fixed yet, but I landed some workarounds that prevent the issue in these tests (waiting for the promise to be resolved before marking the test as done). 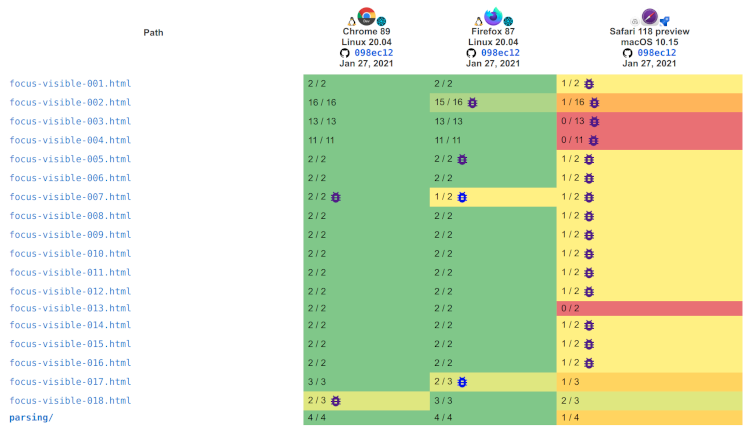 Status of WPT :focus-visible tests in the different browsers

To close the tests part, you can check the status in wpt.fyi, most of them are passing in all implementations which is great, but there are some interoperability issues that we’ll review next.

As I mentioned the wpt.fyi website helps to easily identify the interop issues between the different implementations.

Probably you don’t know what’s that, but it’s somehow related to :focus-visible so I believe it’s worth to mention it here.

WebKit is the browser that supports better :focus pseudo-class behavior on Shadow DOM (see the WPT tests results). The issue here is that the ShadowRoot should match :focus if some of the descendants are focused, so if you have an <input> element in the Shadow Tree, and you focus it, you’ll have 2 elements matching :focus the ShadowRoot and the <input>.

In Chromium if you use delegatesFocus=true in element.attachShadow(), and you have an example like the one described above, you’ll get two focus indicators, one in the ShadowRoot and one in the <input>. Firefox doesn’t match :focus in the ShadowRoot so the issue is not present there.

WebKit matches :focus independently of delegatesFocus value (which is the right behavior per spec), so it’d be even more common to have a situation of getting two focus indicators. To avoid that WebKit introduced :-webkit-direct-focus pseudo-class, that is not web exposed, but it’s used in the default UA style sheet to avoid this bad effect of having a focus indicator on the ShadowRoot.

I believe :focus-visible spec should describe that behavior regarding how it works on ShadowRoot so it doesn’t match on those situations. That way WebKit could get rid of :-webkit-direct-focus and use :focus-visible once it’s implemented. I’ve reported a CSSWG issue to discuss this topic.

Despite all this related work, I’ve also found some time to work on a patch. It’s still not ready to be sent upstream but it’s already doing some things and passing some of the WPT tests. Of course several things are still missing, but next you can see quick screen recording with :focus-visible working on WebKit.

I know this is not really relevant, but it helps to get a grasp on what has been happening during this month:

The plan for February is to try to find an agreement on the CSSWG issues, close them, and update the WPT tests accordingly. Maybe this work could include even landing some patches on the current implementations. And of course, focus (pun intended) the effort on implementation of :focus-visible in WebKit.

I hope this blog post helps you to understand better the work that goes behind the scenes when a web platform feature is implemented, especially if you want to do it on a way that ensures browser interoperability and reduces web authors’ pain.

If you enjoyed this project update, stay tuned as there will more in the future.