2020 is not a great year to do any kind of recap, but there have been some positive things happening in Igalia during this year. Next you can find a highlight of some of these things in no particular order.

The year couldn’t start better, on January Igalia hosted a CSS Working Group face-to-face meeting in our office in A Coruña (Galicia, Spain). Igalia has experience arranging other events in our office, but this was the first time that the CSSWG came here. It was an amazing week and I believe everyone enjoined the visit to this corner of the world. 🌍

Fantastic @CSSWG meeting hosting by @igalia.@svgeesus and I are so incredibly grateful that they are providing childcare for us, for all three days of the meeting, on the same floor. ❤️
Setting the bar high!

Brian Kardell from Igalia was talking to everybody about Container Queries. This is one of the features that web authors have been asking for since ever, and Brian was trying to push the topic forward and find some kind of solution (even if not 100% feature complete) for this topic. In that week there were discussions about the relationship with other topics like Resize Observer or CSS Containment, and new ideas appeared too. Brian posted a blog post after the event, explaining some of those ideas. Later my colleague Javi Fernández worked on an experiment that Brian mentioned on a recent post. The good news is that all these conversations managed to bring this topic back to life, and past November Google announced that they have started working on a Container Queries prototype in Chromium.

During the meeting Jen Simmons (in Mozilla at that time, now in Apple) presented some topics from Mozilla, including a detailed proposal for Masonry Layout based on Grid, this has been something authors have also showed interest, and Firefox has already a prototype implementation behind a runtime flag.

Apart from the three days full of meetings and interesting discussions, some of the CSSWG members participated in a local meetup giving 4 nice talks:

Finally, I remember some corridor conversations about the Mozilla layoffs that had just happened just a few days before the event, but nobody could expect what was going to happen during the summer. It looks like 2020 has been a bad year for Mozilla in general and Servo in particular. 😢

This summer Igalia launched the Open Prioritization campaign, where we proposed a list of topics to be implemented on the different browser engines, and people supported them with different pledges; I wrote a blog post about it by that time.

This was a cool experiment, and it looks like a successful one, as :focus-visible in WebKit/Safari has been the winner. Igalia is currently collecting funds through Open Collective in order to start the implementation of :focus-visible in WebKit, you still have time to support it if you’re interested. If everything goes fine this should happen during the first quarter of 2021. 🚀

This actually started in later 2019, but it has been ongoing during the whole 2020. Brian Kardell has been recording a podcast series about the web platform and some of its features with different people from the industry. They have been getting more and popular, and Brian was even asked to record one of these for the last BlinkOn edition.

So far 8 episodes of around 1 hour length have been published, with 13 different guests. More to come in 2021! If you are curious and want to know more, you can find them at Igalia website or in your favourite podcasting platform.

This is not a comprehensive list but just some highlights of what Igalia has been doing in 2020 around CSS:

We’re working on a demo about these features, that we’ll be publishing next year.

In February Chromium published the requirements to become API owner. Due to my involvement on the Blink project since the fork from WebKit back in 2013, I was nominated and became Blink API Owner past March. 🥳 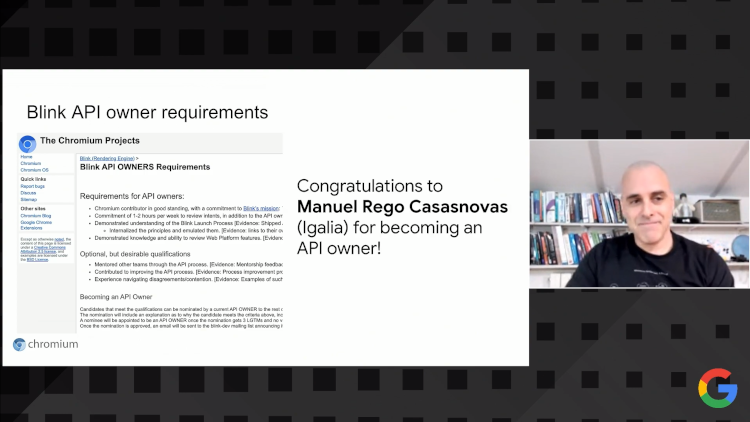 The API owners met on a weekly basis to review the intent threads and discuss about them, it’s an amazing learning experience to be part of this group. In my case when reviewing intents I usually pay attention to things related to interoperability, like the status of the spec, test suites and other implementations. In addition, I have the support from all my awesome colleagues at Igalia that help me to play this role, thank you all!

Igalia keeps growing and a bunch of amazing folks will join us soon, particularly Delan Azabani and Felipe Erias are already starting these days as part of the Web Platform team.

Open Prioritization should have the first successful project, as :focus-visible is advancing funding and it gets implemented in WebKit. We hope this can lead to new similar experiments in the future.

And I’m sure many other cool things will happen at Igalia next year, stay tuned!