One year more Igalia organized, hosted and sponsored a new edition of the Web Engines Hackfest. This is my usual post about the event focusing on the things I was working on during those days.

This year I wanted to talk about this because being part of the organization in an event with 60 people is not that simple and take some time. I’m one of the members of the organization which ended up meaning that I was really busy during the 3 days of the event trying to make the life of all the attendees as easy as possible.

Yeah, this year we were 60 people, the biggest number ever! Note that last year we were 40 people, so it’s clear the interest in the event is growing after each edition, which is really nice.

For the first time we had conference badges, with so many faces it was going to be really hard to put names to all of them. In addition we had pronouns stickers and different lanyard color for the people that don’t want to appear in the multimedia material published during and after the event. I believe all these things worked very well and we’ll be repeating for sure in future editions. 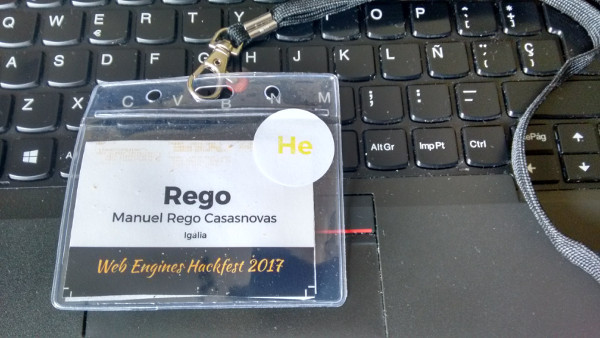 The survey after the event showed an awesome positive feedback, so we’re really glad that you have enjoined the hackfest. I was specially happy seeing how many parallel discussions were taking place all around the office in small groups of people.

The main focus of the event is the different discussions that happen between people about many different topics. This together with the possibility to hack with some people from other browser engines and/or other companies make the hackfest an special event.

On top of that, we arrange a few talks that are usually quite interesting. The talks from this year can be found on a YouTube playlist (thanks Juan for helping with the video editing). This year the talks covered the following topics: Web Platform Tests, zlib optimizations, Chromium on Wayland, BigInt, WebRTC and WebVR. 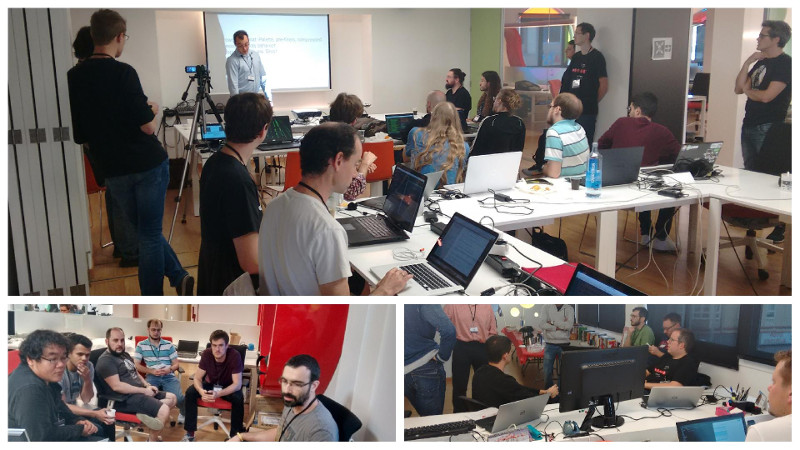 Some pictures of the Web Engines Hackfest 2017

During the hackfest I participated in several breakout sessions, like for example one about Web Platform Tests or another one about MathML. However as usual on the last years my main was related to CSS Grid Layout. In this case we took advantage to discuss several topics from which I’m going to highlight two:

Chromium bug on input elements which only happens on Mac

This is about Chromium bug #727076, where the input elements that are grid items get collapsed/shrunk when the user starts to enter some text. This was a tricky issue only reproducible on Mac platform that was hitting us for a while, so we needed to find a solution.

We had some long discussions about this and finally my colleague Javi found the root cause of the problem and finally fixed it, kudos!

This bug is a quite complex and tight to some Chromium specific implementation bits. The summary is that in Mac platform you can get requests about the intrinsic (preferred) width of the grid container at random times, which means that you’re not sure a full layout will be performed afterwards. Our code was not ready for that, as we were always expecting a full layout after asking for the intrinsic width.

This is a neverending topic that has been discussed in the CSS WG for a long time. There are 2 different things so let’s go one by one.

First, how percentage tracks are resolved when the width/height of a grid container is indefinite. So far, this was not symmetric but was working like in regular blocks:

However the CSS WG decided to change this and make both symmetric, so percentage rows will work like percentage columns. This hasn’t been implemented by any browser yet, and all of them have interoperability with the previous status. We’re not 100% sure about the complexity this could bring and before changing current behavior we’re going to gather some usage statistics to verify this won’t break a lot o content out there. We’d also love to get feedback from other implementors about this. More information about this topic can be found on CSS WG issue #1921.

Now let’s talk about the second issue, how percentage gaps work. The whole discussion can be checked on CSS WG issue #509 that I started back in TPAC 2016. For this case there are no interoperability between browsers as Firefox has its own solution of back-computing percentage gaps, the rest of browsers have the same behavior in line with the percentage tracks resolution, but again it is not symmetric:

The CSS WG resolved to modify this behavior to make them both symmetric, in this case choosing the row gaps behavior as reference. So browsers will need to change how column gaps work to avoid resolving the percentages during layout. We don’t know if we could detect this situation in Blink/WebKit without quite complex changes on the engine, and we’re waiting for feedback from other implementors on that regard.

So I won’t say any of those topics are definitely closed yet, and it won’t be unexpected if some other changes happen in the future when the implementations try to catch up with the spec changes.

To close this blog post let’s say thanks to everyone that come to our office and participated in the event, the Web Engines Hackfest won’t be possible without such a great bunch of people that decided to spend a few days working together on improving the status of the Web. 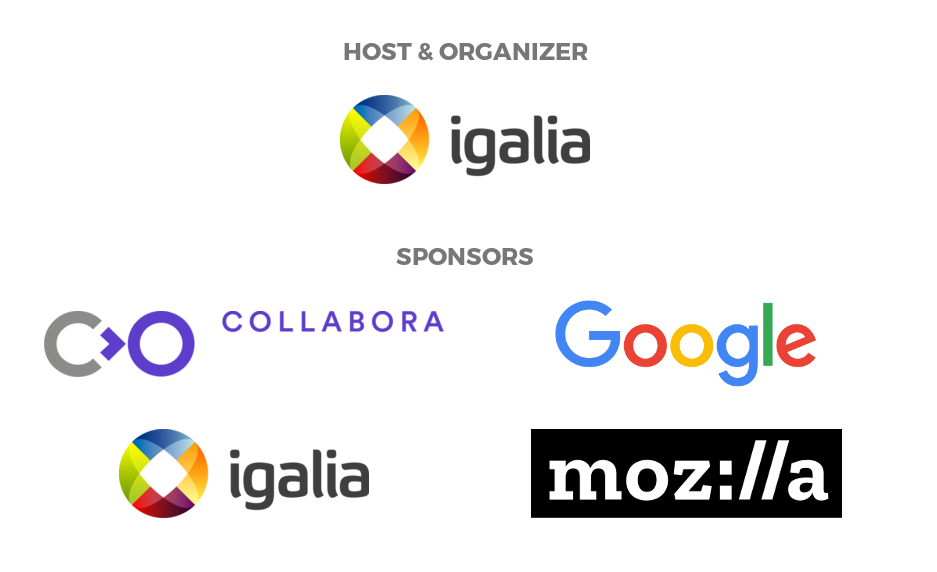 Of course we cannot forget about the sponsors either: Collabora, Google, Igalia and Mozilla. Thank you all very much!

And last, but not least, thanks to Igalia for organizing and hosting one year more this event. Looking forward to the new year and the 2018 edition!