So here we’re again, this time to announce that I’ll be presenting my talk “CSS Grid Layout from the inside out” at HTML5DevConf Autumn 2015 (19-20 October). I’m really excited about this new opportunity to show the world the wonders of CSS Grid Layout specification, together with the “dark” stuff that happens behind the scenes. Thanks to the organization for counting me in. 😃 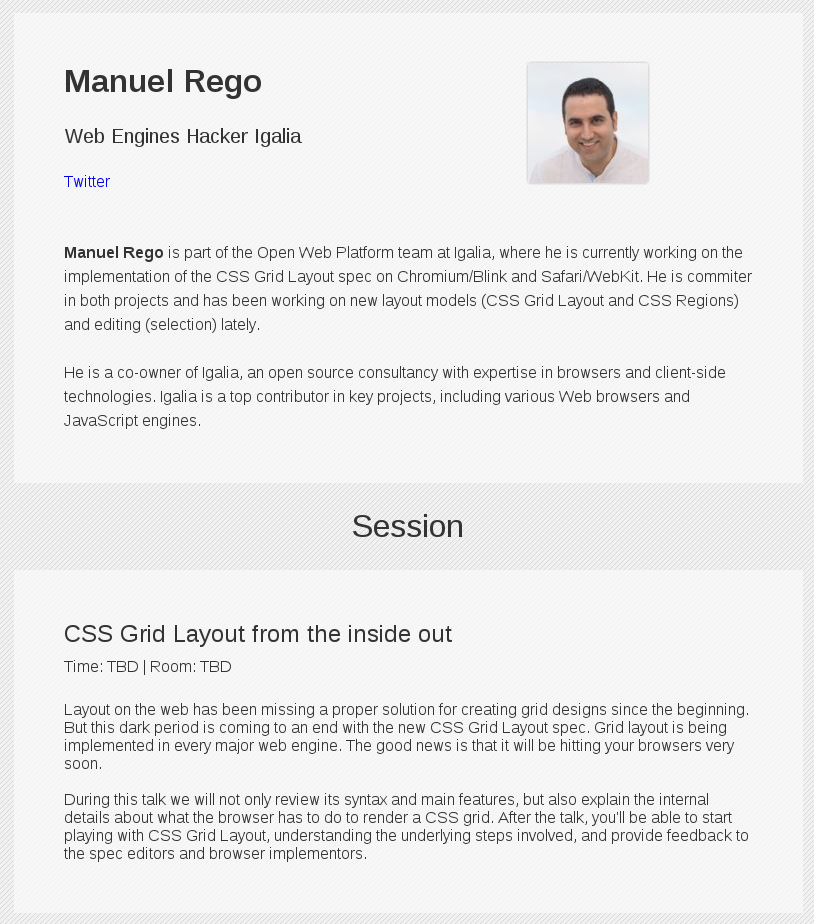 During the talk I’ll give a short introduction to the grid layout syntax and features, including some of the most recent developments, like the much awaited grid gutters (which will hopefully land very soon). Igalia has been working on the CSS Grid Layout implementation on Blink and WebKit since 2013 as part of a collaboration with Bloomberg. Right now we’re closer than ever to ship the feature in Chromium!

This’ll be my second grid layout talk this year after the one at CSSConf in New York. It’ll be my first time at HTML5DevConf and my first time in San Francisco too. It seems a huge conference full of great speakers and interesting talks. I really hope that people like my talk, anyway I’m sure I’ll enjoy the conference and learn a lot about the latest cool stuff that is moving around the web platform. Please, feel free to ping me if you want to talk about grid, new layout models, the web and/or Igalia.

Last but not least, my igalian mate Martin Robinson who is currently hacking on Servo will be attending the conference too. Don’t hesitate to ask him any question about web browser engines, he knows them very well. 😉