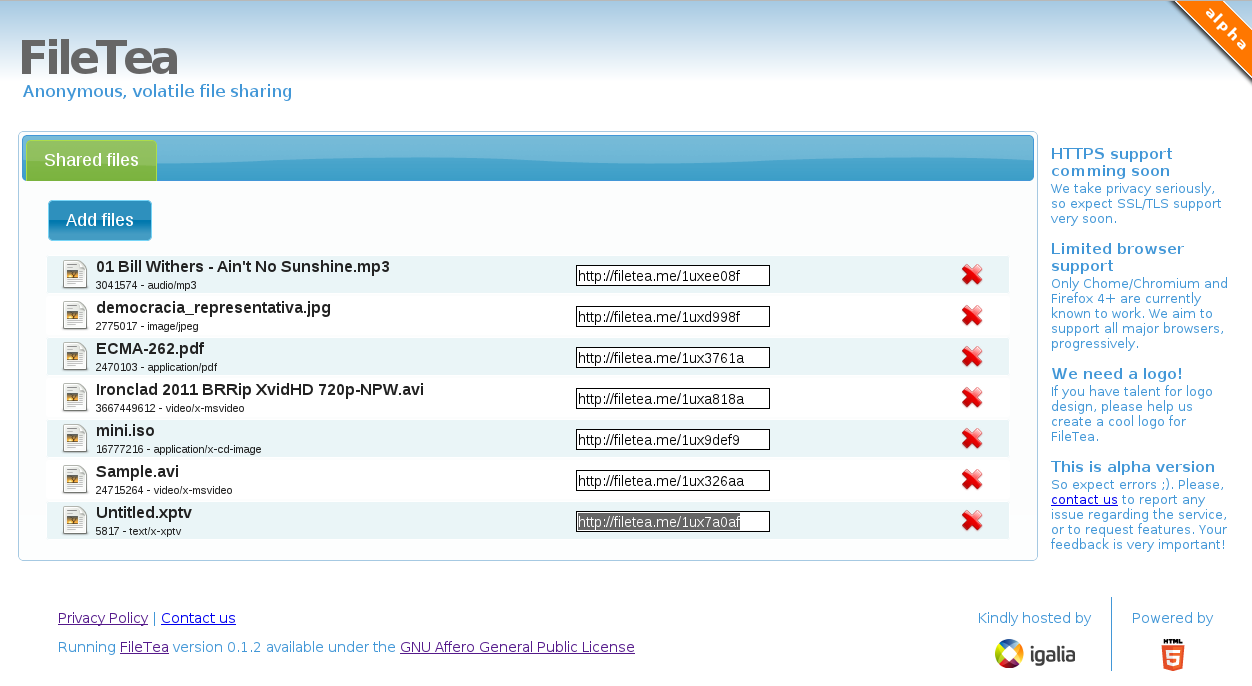 Let me present you FileTea, a project enabling anonymous file sharing for the Web. It is designed to be simple and easy to use, to run in (modern) browsers without additional plugins, and to avoid the hassle of user registration.

A reference deployment is running at http://filetea.me. It is alpha version and is kindly hosted by Igalia (thanks!). Please, feel free to try it (and provide feedback!).

FileTea is free software and released under the terms of the GNU AGPL license. That means that you can install it in your own server and host it yourself for your organization, your business or your friends. The source code is hosted at Gitorious.

We are not alone

There are similar services running out there like http://min.us, http://ge.tt, http://imm.io, and maybe others I’m not aware of. But FileTea is different in three important aspects:

Currently, FileTea has the bare minimum features to allow file-sharing, but I have a long list of possibly cool stuff to add as I find free time to work on them. Some hot topics are:

If you have more ideas, I would be happy to hear them.

So that’s it, happy sharing!

EventDance is a library aiming to help developing secure and scalable peer-to-peer applications. It provides a set of easy-to-use APIs that developers can use in their programs in order to connect with other local or remote applications in a fast, secure and reliable fashion.

EventDance breaks from the idea that any system capable of running code and connect to some type of network, can be considered a “peer” and should be able to exchange data with other peers in the network under equal conditions. There is no high level concept of client or server in EventDance, but only peers that are equally important and always treated as such. For instance, a webpage running in a browser is considered a peer as much as a daemon process running in a server; and so is for software running in a mobile phone, a TV or a fridge connected to internet. This homogenized view of applications as potential creators and consumers of content and events, is a fundamental feature of EventDance and the reason behind its simplicity.

EventDance defines an abstract concept of Transport as a mean to move data between peers. Several types of transport exist and peers can choose one or more of them to communicate with another peer. Two peers can communicate as long as they have at least one transport in common. EventDance provides implementations for different types of transport (at the moment, only a Web transport). As protocols and technologies run obsolete and new ones appear, EventDance is ready to drop and embrace new types of transport; yet holding the same abstract concept. This concept is not new. Several other networking software like GNUnet have used a similar abstraction in a future-proof design.

EventDance also provides means for applications to communicate securely following the end-to-end principle. APIs are provided for programs to easily implement data privacy and peer authentication at a cryptographic level. An effort has been made to hide some of the complexity of dealing with cryto APIs as much as possible. The library uses GnuTLS as the backend for cryptography.

EventDance is written in C language using GLib/GObject. It automatically generates gobject-introspection information upon building, meaning it can be used in other languages like Javascript, Python, Lua, Vala or any other environment supporting G-I; without the need for specific bindings. The framework is designed to be lightweight, fast, scalable and energy efficient. For socket IO, it currently uses epoll exclusively, but it might support other similar mechanisms available for other platforms, in the future.

EventDance is completely event-driven, based on the GLib main loop. Applications using it are expected to be event-driven as well. All activity in the library is asynchronous and non-blocking. If some bocking operation needs to be performed, it should be moved to a thread to avoid hanging the main event loop. This is a fundamental design feature of EventDance to guarantee scalability and graceful service degradation.

EventDance is in an early stage of development. I started coding it from scratch during autumn 2009, after a first attempt written in Perl, back in 2007. I have devoted mostly my free time, and some hours sponsored by my employer, Igalia, through its hackfest initiative.

The current and only release so far is 0.1.2. Following is a list of the features currently available and others planned for the near future:

Features planned for next minor release (0.2):

Some of the many features planned for the long-term:

EventDance is licensed under the terms of the GNU LGPL license version 3, and is hosted at Gitorious. There is neither mailing-list nor bug tracking tool at the moment, but I’m always and happily expecting feedback, criticism, suggestions and bug reports in my inbox at elima at igalia dot com. Contributions are of course very welcomed. Minimal documentation does exist, but is less than useful at the moment.